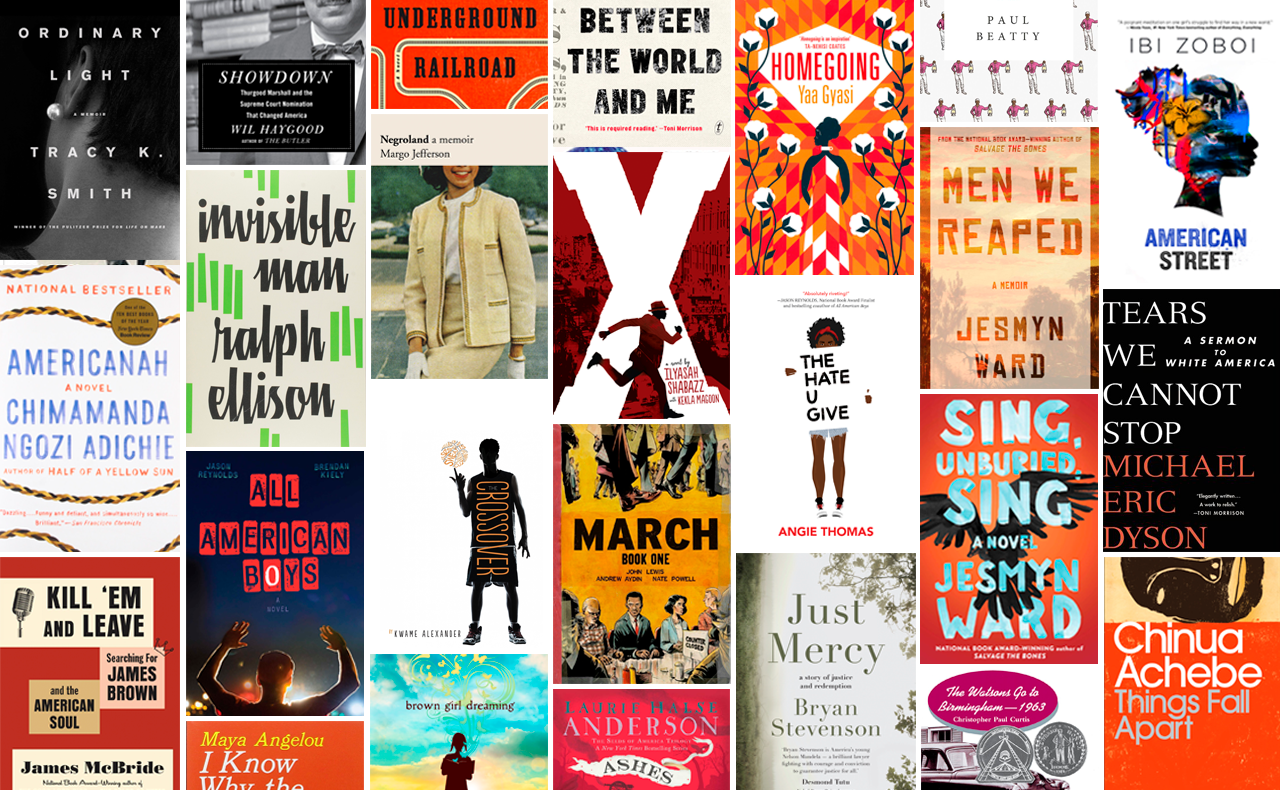 For Black History Month, PBS Books has put together a list of inspirational works honoring the African-American experience.

Voyage of the Sable Venus: and Other Poems

Winner of the 2015 National Book Award for Poetry, Voyage of the Sable Venus is a beautiful meditation on the black female figure throughout time. The lyric poems that comprise Voyage collectively consider the roles desire and race play in defining us all, including Coste Lewis's own sometimes painful history. A beautiful and deeply thoughtful collection.

In this lovely memoir, Smith, a Pulitzer Prize winner and current U.S. poet laureate, shares her remarkable coming-of-age story examining the meaning of home against a complex backdrop of race, faith, the bonds between a mother and daughter, and what it means to be black in America.

Raised in South Carolina and New York, Woodson always felt halfway home in each place. In vivid poems, she shares what it was like to grow up as an African American in the 1960s and 1970s, living with the remnants of Jim Crow and her growing awareness of the Civil Rights movement. Winner of the National Book Award for Young People's Literature and a Newbery Medal Honor winner, Brown Girl Dreaming is a touching glimpse into a child’s soul as she searches for her place in the world.

Their Eyes Were Watching God

One of the most important and enduring books of the twentieth century, Hurston's masterwork remains as relevant and affecting today as when it was first published—perhaps the most widely read and highly regarded novel in the entire canon of African American literature.

Co-written by Malcolm X’s daughter, this riveting and revealing novel interprets the formative years the civil rights era leader, following Malcolm from his childhood to his imprisonment for theft at age twenty, when he found the faith that would lead him to forge a new path and command a voice that still resonates.

A powerful examination of our obsession with beauty and conformity, Toni Morrison’s unforgettable first novel asks powerful questions about race, class, and gender with the subtlety and grace that have always characterized her writing.

The Fire Next Time
James Baldwin

At once a powerful evocation of James Baldwin's early life in Harlem and a disturbing examination of the consequences of racial injustice, the book is an intensely personal and provocative document. An instant bestseller when it was released in 1963, Baldwin's words and warnings remain, sadly, as urgent and vital today as ever before.

The Hate You Give

Sixteen-year-old Starr Carter moves between two worlds: the poor neighborhood where she lives and the fancy suburban prep school she attends. The uneasy balance between these worlds is shattered when Starr witnesses the fatal shooting of her childhood best friend Khalil at the hands of a police officer. Khalil was unarmed. A powerful, urgent novel for our times.

In this wonderful young adult debut novel, National Book Award finalist Ibi Zoboi draws on her own experience as a young Haitian immigrant, infusing her unique lyrical exploration of America with magical realism and vodou culture. A timely story of U.S. immigration, Zoboi explores the challenges and costs of seeking the American dream.

Discover the inside story of the Civil Rights Movement through the eyes of one of its most iconic figures, Congressman John Lewis. March is the award-winning, #1 bestselling graphic novel trilogy recounting his life in the movement, co-written with Andrew Aydin and drawn by Nate Powell. A multiple award winner, March Book One became the first graphic novel to win a Robert F. Kennedy Book Award in 2014.

A 2016 Coretta Scott King Author Honor book, and recipient of the Walter Dean Myers Award for Outstanding Children’s Literature, is written in tandem by two award-winning authors, sharing the alternating perspectives of Rashad and Quinn as the complications and racial tensions from a single violent moment unfold and reverberate to highlight an unwelcome truth.

The Watsons Go to Birmingham--1963

A classic of young people's literature that transports young readers directly into the heart of the Civil Rights Movement and one of its most tragic, unforgettable moments--the 16th Street Baptist Church bombing in Birmingham, Alabama in 1963. A powerful piece of historical fiction.

Tears We Cannot Stop is author, professor and political analyst Michael Eric Dyson's provocative and passionate call for change. Dyson argues that if we are to make real racial progress we must face difficult truths, including being honest about how black grievance has been ignored, dismissed, or discounted.

Kill ’Em and Leave: Searching for James Brown and the American Soul

National Book Award winner James McBride goes in search of the “real” James Brown after receiving a tip that promises to uncover the man behind the myth. His surprising journey illuminates not only our understanding of this immensely troubled, misunderstood, and complicated soul genius but the ways in which our cultural heritage has been shaped by Brown’s legacy.

A biting satire about a young man's isolated upbringing and the race trial that sends him to the Supreme Court, Paul Beatty's The Sellout challenges the sacred tenets of the United States Constitution, urban life, the civil rights movement, and the father-son relationship. Winner of the 2016 Man Booker Prize for fiction.

Ifemelu and Obinze are young and in love when they depart military-ruled Nigeria for the West. Beautiful, self-assured Ifemelu heads for America, where despite her academic success, she is forced to grapple with what it means to be black for the first time.

In Whitehead’s ingenious storytelling style, the Underground Railroad is not just metaphor, but an actual secret operational network of tracks and tunnels beneath ground. Throughout her journey toward freedom, protagonist Cora encounters different worlds at each stage a magical flight through time as well as space. Winner of both the Pulitzer Prize and the National Book Award.

An intimate portrait of a family and an epic tale of hope and struggle, Sing, Unburied, Sing journeys through Mississippi’s past and present, examining the ugly truths at the heart of the American story and the power—and limitations—of family bonds. Winner of the 2017 National Book Award for Fiction.

Men We Reaped: A Memoir

Ward's memoir shines a light on the community she comes from, in the small town of DeLisle, Mississippi, a place of quiet beauty and fierce attachment. Here, in the space of four years, she lost five young men dear to her, including her beloved brother-lost to drugs, accidents, murder, and suicide. An indispensable memoir that points to problems with deep American roots.

Between the World and Me

A profound work that pivots from the biggest questions about American history and ideals to the most intimate concerns of a father for his son, Ta-Nehisi Coates offers a powerful new framework for understanding our nation’s history and current crisis. Winner of the 2015 National Book Award for Nonfiction.

Homegoing follows the parallel paths of two Ghanian sisters--each born into different villages, each unaware of the other--and the very different lives that unfold for them and the descendants of each through eight generations: from the Gold Coast to the plantations of Mississippi, from the American Civil War to Jazz Age Harlem.

A powerful true story about the potential for mercy to redeem us, and a sharp call to fix our broken system of justice—from lawyer and activist Bryan Stevenson, founder of the Equal Justice Initiative, a legal practice dedicated to defending those most desperate and in need: the poor, the wrongly condemned, and women and children trapped in the farthest reaches of our criminal justice system.

Together with the first and second books in the trilogy, Chains and Forge, respectively, The Seeds of America Trilogy stories take place as the nation fights for its freedom from England, and Isabel, Ruth, and Curzon, who have only known life in bondage, begin a perilous struggle for their own freedom.

With more than 20 million copies sold and translated into fifty-seven languages, Things Fall Apart provides one of the most illuminating and permanent monuments to African experience. A classic that beautifully relates the impact on village life as white missionaries moved into Nigeria and Africa at large.

I Know Why the Caged Bird Sings

Speaking of Maya Angelou's modern American classic memoir of her upbringing, the great James Baldwin said, "I know that not since the days of my childhood, when people in books were more real than people one saw every day, have I found myself so moved."

Published by Ralph Ellison in 1952 to instantaneous acclaim, Invisible Man chronicles the travels of its narrator, a young, nameless black man, as he moves through the hellish levels of American intolerance and cultural blindness.

Butler tells the story of Dana, a modern black woman, is celebrating her twenty-sixth birthday with her new husband when she is snatched abruptly from her home in California and transported through time to the antebellum South. One of the most original, thought-provoking works examining race and identity.

Pulitzer Prize–winning cultural critic Margo Jefferson was born in 1947 into upper-crust black Chicago, her father head of pediatrics at Provident Hospital, her mother a socialite. Jefferson describes the insular society she describes in the title of her book. “I call it Negroland,” she writes, “because I still find ‘Negro’ a word of wonders, glorious and terrible.”

An authoritative account of one of the most transformative Supreme Court justices of the twentieth century, Showdown makes clear that it is impossible to overestimate Thurgood Marshall’s lasting influence on the racial politics of our nation.