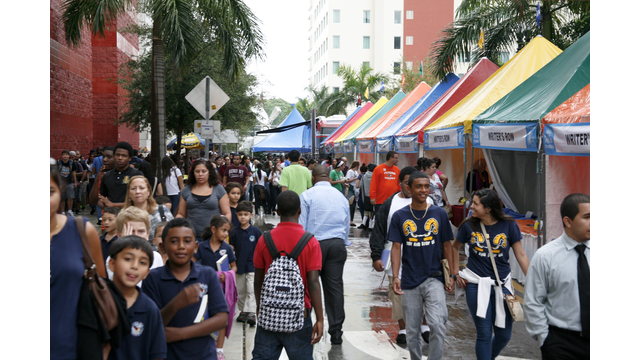 Partnership Made Possible By The John S. And James L. Knight Foundation

Miami, November 10, 2014 – For the first time ever, PBS audiences across the country will have the opportunity to enjoy the acclaimed Miami Book Fair International, produced and presented by The Center for Writing and Literature @ Miami Dade College (MDC). Coverage will be produced by Detroit Public Television (DPTV) and distributed via multiple platforms including PBS.org, PBS station websites and WORLD Channel. The coverage is made possible thanks to the support of the John S. and James L. Knight Foundation.

DPTV's partnership with the Miami Book Fair International represents the first major book and author live event coverage for PBS. The three-day coverage—from Friday, November 21 through Sunday, November 23 will include a daily live stream presentation of selected interviews, panels, and on-the-street fair segments accessible via PBS.org, select PBS station websites and WORLDChannel.org. In addition, select segments will be archived and available for on-demand viewing across PBS.org, PBS station websites and all PBS video apps, including those for iPhone, iPad, Xbox, Roku and Apple TV, as well as YouTube.

The live stream webcast will air on Friday, November 21 from 4-9 pm ET, Saturday from 12 noon-6 pm ET, and Sunday from 12 noon-6 pm ET. In addition to PBS online platforms, the live stream will be available via a free online video player available to any individual or entities, including bookstores, publishers, blogs and media outlets wishing to share the stories, events and energy of the Miami Book Fair International with their audiences. Embed code instructions and additional information about coverage can be found at www.BookViewNow.org.

"We think it's great that PBS audiences throughout the country will get to learn what the Book Fair is all about," said Book Fair chair and co-founder Mitchell Kaplan. "The Fair is grateful for Knight Foundation's support of DPTV coming to Miami to cover the Fair."

"Detroit Public Television is proud to be bringing book lovers around the nation coverage of this esteemed event for the very first time," said Rich Homberg, DPTV's President and CEO. "We look forward to this partnership with Knight Foundation and PBS as we engage our viewers' interest in the enriching world of books."

"PBS and our member stations are pleased to be part of this effort to bring the experience of the Miami Book Fair International to the American public, and we thank the Knight Foundation, Miami Dade College and Detroit Public Television for helping to make it possible," said Ira Rubenstein, Senior Vice President and General Manager, Digital, PBS. "Books and literature have a strong affinity with the PBS audience, and we hope book lovers across the country will take advantage of the opportunity to experience this unique event."

The PBS partnership is one of several efforts Knight Foundation is supporting for this year's Book Fair as a way to make Miami a year-round destination for writers and readers.

"The Miami Book Fair is one of the most important and largest in the country, it has always been a jewel of the community," said Alberto Ibargüen, president of Knight Foundation. "Technology now makes it possible for the Fair to transcend its location and be open for others."

Celebrating its 31st year, The Miami Book Fair will take place from November 16 to 23, 2014 and feature more than 500 authors and more than 200,000 book lovers. Since its inception, the fair has also partnered with C-SPAN's BookTV to broadcast author sessions to a national audience.

For regular updates on the Miami Book Fair, please visit www.miamibookfair.com, call 305-237-3258 or email wbookfair@mdc.edu. Find the Fair on social media at:

About the Miami Book Fair International:
Widely considered the largest and finest literary event in the U.S., The Miami Book Fair International is the premier event of The Center for Writing and Literature @ Miami Dade College, a part of MDCulture, the Cultural Affairs Department of the College. The Center promotes reading, writing and theater at locations throughout South Florida by consistently presenting activities open to all. Its Generation Genius programs for children and teens promote literacy and learning. Its creative writing program has national appeal, and courses are taught by local and visiting authors. In 2012, the Center celebrated its tenth year with a renewed commitment to the advancement of literary and theater arts.

About Detroit Public Television:
Detroit Public Television (DPTV)-WTVS-TV is the non-commercial, viewer-supported PBS member station serving the nation's 11th largest television market, with 1.5 million weekly viewers in Southeast Michigan and 1.2 million weekly viewers across Canada. DPTV is a leader in programming related to health and the environment, public affairs, arts and culture and children. It is also a leading national producer and distributor of programming for Public Television, and winner of a 2012 Alfred I. DuPont-Columbia Award, as well as the only dual PBS licensee / entertainment label in the country, operating as DPTV Media.  For more information, visit www.dptv.org

About PBS:
PBS, with its over 350 member stations, offers all Americans the opportunity to explore new ideas and new worlds through television and online content. Each month, PBS reaches nearly 109 million people through television and over 28 million people online, inviting them to experience the worlds of science, history, nature and public affairs; to hear diverse viewpoints; and to take front row seats to world-class drama and performances. PBS' broad array of programs has been consistently honored by the industry's most coveted award competitions. Teachers of children from pre-K through 12th grade turn to PBS for digital content and services that help bring classroom lessons to life. PBS' premier children's TV programming and its website, pbskids.org, are parents' and teachers' most trusted partners in inspiring and nurturing curiosity and love of learning in children. More information about PBS is available at www.pbs.org, one of the leading dot-org websites on the Internet, or by following PBS on Twitter, Facebook or through ourapps for mobile devices. Specific program information and updates for press are available at pbs.org/pressroom or by following PBS PressRoom on Twitter.

About WORLD Channel:
The WORLD Channel is a 24/7, multicast channel dedicated to delivering the best of public television's nonfiction, news and documentary programming as well as a growing schedule of original content from independent producers and multi-cultural communities. The complementary website, www.WORLDchannel.org, expands on broadcast topics and fuels content across social media, providing opportunities for broad and diverse audience interaction. WORLD Channel is service of WGBH/Boston, in partnership with American Public Television and WNET/New York, and in association with the Public Broadcasting Service and the National Educational Telecommunications Association. Funding for WORLD Channel is provided by the Corporation for Public Broadcasting and the Ford Foundation.